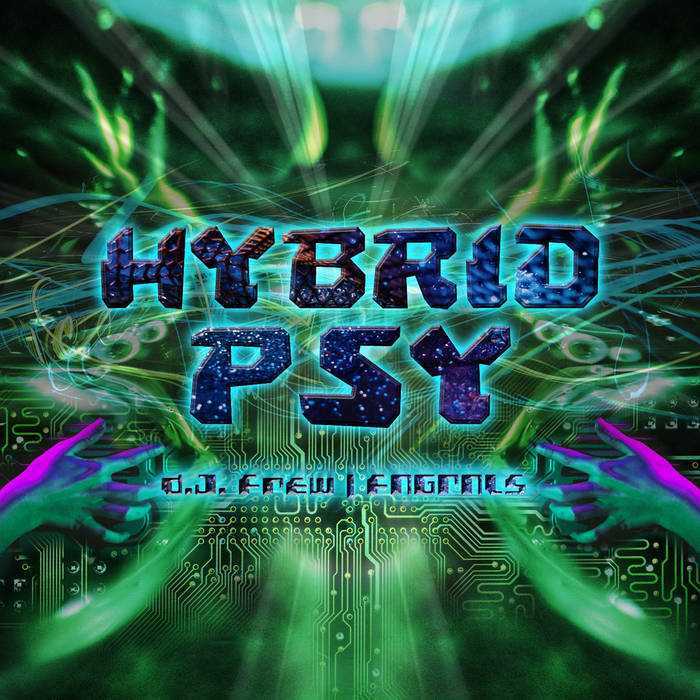 By Brian Grimmett
Tackling new horizons is a driving force amongst artists, and nowhere is this more prevalent than with FNGRNLS. With releases ranging from dubstep to drum and bass, techno, and beyond, it’s readily apparent his dedication and passion towards pushing boundaries and exploring new ways of making music runs deep. His newest release, Hybrid Psy, takes this a step further by not only delivering his own unique bent on the genre but by bringing fellow producer D.J. Frew into the fold as well. This has resulted in intense and fascinating material which stays true to the roots of each genre while seriously stretching the boundaries of each as well.
“Our first collaboration took place in 2017 with “Shmooblydong,” recalls Zach Shrout, the mind behind FNGRNLS. “Davey sent me some stems for a song he was working on, but at the time he was unsure whether his initial idea to use the standard psytrance tempo of 148 was the right move or if a faster one of 170 fit better; so he had sent me stems at each tempo. I thought the WIP sounded great at both speeds, and I started getting ideas for each. So we ended up using both, with a long ambient section in the middle, bridging the two. What resulted was a 10 minute psy epic that encompasses psytrance, breaks, DNB, hard dance, and dubstep.”
“Shmooblydong” is a throbbing relentless journey moving at the speed of sound. Bubbling to the brim with twisting waves of sound that ebb and flow with the furious rhythmic changes, it intricately fuses hypnotic melodies and deep growls of noise to worm itself deep inside the brain. The pacing itself keeps you on the edge of your seat, never sure when a jump into hyperspace is going to ambush you. Epic in its length and scope, this one is a world all its own.
“Now with two songs completed, I thought it would be great to do one more and release all three as an EP,” explains Shrout. “Hoping to do something a little different this time around, I asked Davey if he had any WIPs in the psybreaks realm. Turns out he had several ideas and sent me short clips of each one. Unable to choose just one, we picked two that were similar in tempo and key, and then mashed them up into a single piece.”
The harmonic bliss of “Blue Sweet Spark” enters with its dream-like tentacles, using spacious off-beat drums which build into a rhythmic pulse, increasing its grip with each passing moment. The methodical pacing counterpoints the winding synths that dominate the landscape, creating razor sharp tension that threatens to never let you go. Alternating between a steady and broken beat, this is a mesmerizing journey through the dark side you won’t soon forget.
“I met Zach (FNGRNLS) at Producers’ Social: a monthly, Los Angeles-based group for producers to share works in progress” states Frew. “What immediately impressed me was his formidable sound design capabilities, his work ethic, and his love for the faster side of electronic music.“
“I am actually afflicted with a sort of musical ADHD – I can’t stick to one genre to save my life! Having delved into psytrance, ravebreaks, acid techno, trip-hop and beyond, my affinity for driving beats, melodic journeys and intricately layered arrangements is evident throughout my productions. No matter the style, I seek to create music to get lost in, each track an immersive experience in which you can discover something new no matter how often you listen.”
“PLURple Nurple” is the ideal expression of the genre-bending approach to sound, with each artists sound intertwining like strands of DNA. The surging force of the melody creates a static point for the mind to focus; meanwhile, layers of effects create crescendoing walls of sound, driven by addictive warbling motifs that travel endlessly into a psychedelic world of sound. Further adding to this is the feeling of weightlessness created by the shifting drum patterns, perfectly embodying the core tenets of this release.
Out now everywhere, take the plunge into a trippy world you won’t regret!