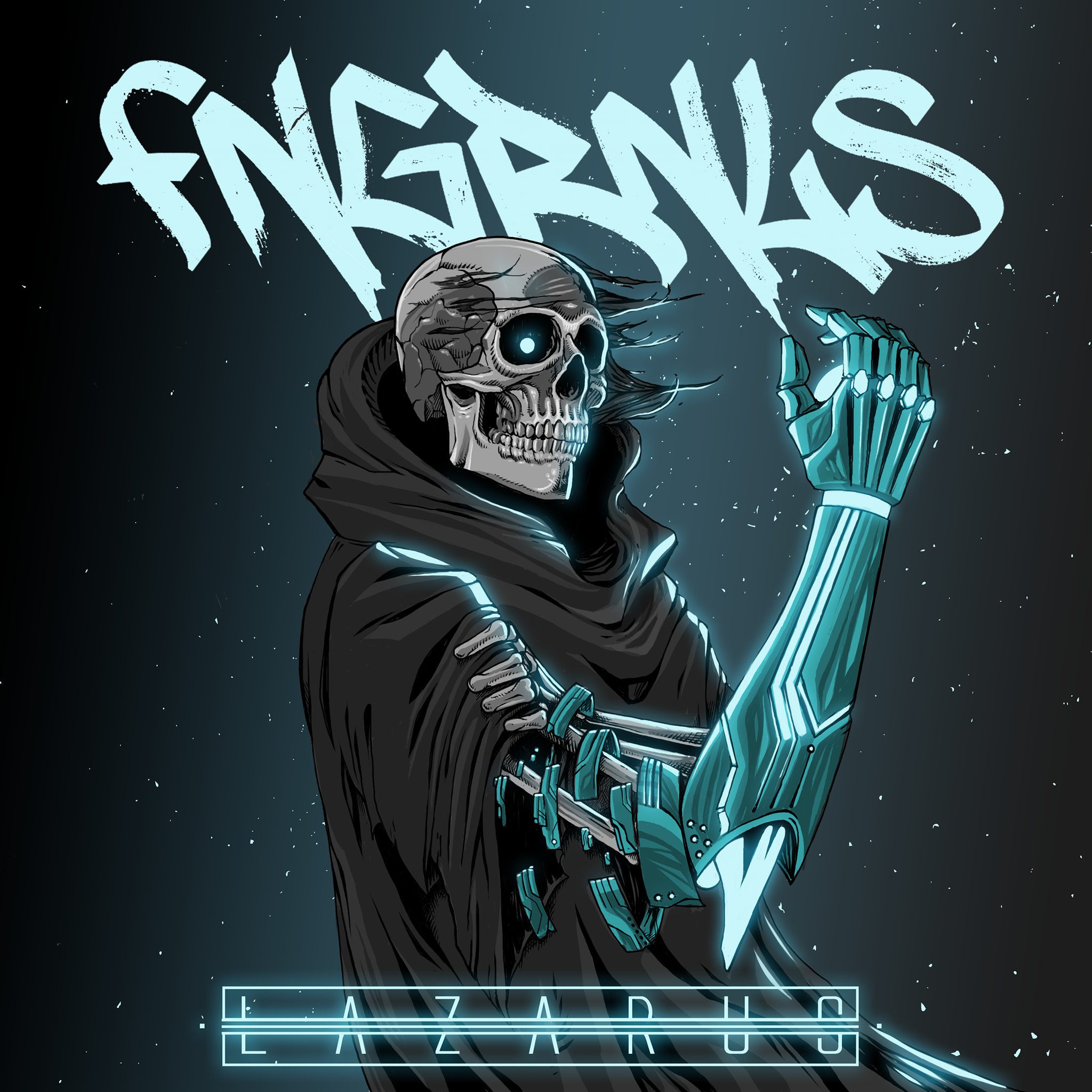 Rising from the depths with a vengeance, FNGRNLS delivers an album full of heaters and shellers all filtered through his own inimitable lens. Lazarus, out on Causmic Creative, is an album that explores the trials and tribulations of life, and the fierce struggle we face to overcome them. With a style that pulls from the crackling sizzle of distorted tones as well as a strong infusion of lush melodies, he effortlessly proves why he is one to keep an eye on.

The surging power that drives “Black Market” sucks you in instantaneously, refusing to let go as dark bass growls twist intricately into the melodic motif that float in and out of the tune. “Wrath” continues the mind warping vibes, with insect-like glitches warbling ceaselessly, burrowing deep into your mind until it launches into an explosion of drum and bass that flings you around like a rag doll.

The album had a rugged conception, evidenced by the factors that influenced it’s creation. “Around mid last year I went through a severe depression and quit making music altogether for a few months,” says Zach Shrout, the mind behind FNGRNLS. “I wasn’t sure I was going to finish it and a bunch of the songs were half finished. I didn’t feel motivated to finish them; but once I got through that, some of the songs I was thinking of abandoning turned out to be some of my best ones.”

The pandemic affected everyone in all sorts of way: some dealt with it explicitly in their music, while others took a more subtle approach. “I pulled from other sources mostly,” he explains. “I don’t think it directly affected the music on the ep but it impacted my mind set, and that indirectly did affect it.”

Elaborating further, Shrout dives deeper into how the lockdown affected him. “During the pandemic, I wasn’t really going out so I was stuck at home with nothing better to do than work on music. That’s where this ep came from; what I’m struggling the most with now is keeping that momentum going as things open back up, trying to keep that creativity going.”

“The concept, Lazarus, comes from the biblical story, although I’m not a religious person,” reveals Shrout. “The story of Jesus who raised his friend from the dead – I felt there was a kind of metaphor about my life there, both personally and the world itself from the pandemic. The world itself is somewhat returning to normal, I was also graduating school and starting a new career as well.

Plus, the major depression I had and pulling myself out of that, I developed a new focus and it felt like a rebirth.”

“Darkness Unending” lives up to it’s name, opening with an ominous atmosphere. Fading away into a melancholic piano piece, it methodically uses space to craft a hard hitting tune that reaches deep into the body while forcing the mind into introspection. With longing vocals and a deeply ethereal atmosphere, the lilting rhythm of “Decadence” is the perfect backdrop for the pulsing ebb and that characterizes the track. The sudden switches in time signature only further drive home the dynamic compositional swing this producer is so adept at.

In addition, the endless possibilities inherent in modern production is a driving feoce behind his music. “I grew up being into rock and metal, and at my core I’m still a metalhead. When you listen to rock or metal thought, you know what you are going to hear: some guitars, drums, vocals, bass, and maybe some keys. But what has come to excite me so much about electronic music is how you can hear literally any sound you could think of, you have no idea what you will hear from song to song. And the advances we have seen allow for much higher level of craftsmanship, and even thought its computer music, it certainly is not simple.”

“After the last album I did, Ritual Sacrifice, which was all bass-centric music like trap, dubstep, and drum bass, I just started making whatever I wanted to,” details Shrout. “I made some techno, some house tracks, more dubstep and drum and bass and started gravitating towards the same kind of stuff I made on the last one. In the end, this one became mostly dubstep and drum n bass.”

Building the tension to a fever pitch, the throbbing bass stabs and hypnotic swirls of FX in “Left Hand Path” come searing in. The mesmizing hum of bass vibrations and hypnotic melodic fills blend together to create the overwhelming atmosphere that defines the tune. Delving further into the interplay between light and dark comes “Glistening,” combining a soothing melodic haze which counterpoints the thrashing wall of bass that overwhelm you. The furious rhythm that crashes in with the second drop seeks to amp everything up to ten, only to drift off into a weightless outro.

His insight into crafting the moods present in his work is a fascinating one: “I prefer instrumental music because your not blatantly told what the song is supposed to be about – it invites the listener to be a part of the creative process and you have to figure out what it means to you.”

The music itself has a diverse vibe, and it’s no surprise his influences reflect a wide palette of interests. “I have a few specific artists that I have been listening to in terms of sound design who I like alot,” informs Shrout. “But my influences vary from song to song depending on what vibe I am going for. I’ve been really into this dubstep guy called Masq – I really like his sound design as it’s really crunchy; it’s almost non-musical yet he makes it musical. There another UK duo, Madda, who I have been listening to for years and their whole vibe and dark atmosphere has been a big influence on me. Ground, who is a dnb producer, is another influence on me; he uses negative space and silence to his advantage in mind opening ways. On this album, I tried to hold back more than I usually do to let each element speak for itself and say more with less.”

Refusing to let up, “Body Bags” takes on an intense journey of jackhammer beats wrapped up in a mutant world of gritty sounds. Using the hard edged swing of a repetitive rhythm, the tough nature of the song belies the hypnotic impact it sublty inflicts on you. Last but not least, “Halcyon” whips out soothing harmonics and a precise use of space to carry us off into oblivion. Tasteful stabs of bass growls dance in unison with the spiky melody, leaving you swirling and longing for more.

The future is bright for FNGRNLS, with plenty of exciting material on the way. “I’ve got two EPs in the work right now,” he divulges. “One is just me and is a bunch of techno and house; while another one is going to be a three track collab with a friend of mine, and is comprised of hard breaks and breakbeat. Those should be out by the end of the year.”

Out now on most major platforms, the Lazarus EP is a stellar release you need to cop ASAP!